On set instructions to some of the Seven Dwarves.

If you do not already know, Once Upon A Time is a TV series filmed in Steveston.  On their second season, they are starting to gain a loyal following.  If you come to Steveston on an opportune time, you may catch the show in action. 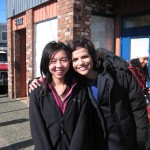 The Queen posing with a fan from Season 1.

Two locations from the show is decorated permanently, Mr. Gold’s Pawnshop and Storybrooke’s Pet Shelter( both are on Moncton Street and Second Avenue )   Or you can watch fans posing for pictures in good weather.